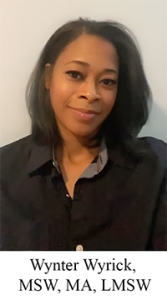 When I was 8 years old, I was introduced to the concept of therapy as a result of my family and I experiencing a tragic loss, my 16-year-old brother was murdered.  Being so young, I didn’t really understand the purpose or the benefit of the sessions.  In my young mind, I decided that we were there to talk to this gentleman so that we wouldn’t be sad anymore.  As an eight-year-old, I found myself lost in those sessions. Looking back, I now realize that I was lost in the aftermath of a family tragedy that left behind chaos.  I can honestly say, it was a blessing, that my parents had the foresight to be concerned about our mental wellbeing.   Though my parents were grieving, they realized that my siblings and I were devastated and shattered.   Although, the sessions did not last long, for many reasons, I believe that those sessions helped my family deal with the anxiety, hurt, pain, the loss.  Those sessions were the steppingstone for my family’s healing and unbeknownst to me, the beginning of my journey into psychology and ultimately my intense desire to help others process their grief and loss.

To make sense of my brother’s death and the end of a life for an 18-year-old that was at the time incarcerated, I decided at an early age to pursue a degree in Psychology.

I earned a B.S degree in Psychology from Wayne State University, 2001.  I maintained employment with Wayne State University’s Institute of Gerontology as a community outreach specialist. That position fueled my interest in mental health and launched my desire to work with populations that were being overlooked.

After six years working as a community organizer and outreach specialist, I returned to school and received my master’s degree in Social Work with a specialization in Community Mental Health from Saint Louis University, in St. Louis, Missouri.

By the time I received my master’s I was secure in my career path and had been blessed with many opportunities of growth that allowed me to flourish as I worked with individuals with severe mental illness.  Under the direction of my professor in St. Louis, I co-authored a publication with him, entitled, Practitioners and consumers perspectives on harm reduction in a community mental health setting. It is now published.

As a result of working with that clientele, I pursued certifications in grief and loss and trauma, as I soon learned that most individuals, I encountered struggled with those issues and resolving those issues made sobriety and mental hygiene more attainable.

After more than a decade of working as a trauma therapist, life took a turn and again my career goals shifted as life had other plans in mind for me.  I was blessed with my oldest son in 2010, who was diagnosed with Autism Spectrum Disorder. Little did I know that becoming a mother of a child with a disability would catapult my career into a different direction and create a paradigm shift that brought to my attention another overlooked population, children with ASD and their parents as they navigate an unsympathetic healthcare system.  As a result, I am currently completing my PhD in Infancy and Early Childhood Development with a emphasis in Autism Spectrum Disorder.

Again, I found myself experiencing a great loss in my life, as I had to come to the realization that my son was different.  And yet, great joy, as my son’s differences makes him unique and special.  Once again, I was able to take grief and make those negative emotions a positive as I believe my life experiences helped make me the therapist that I am today.  The leap from grief to grace was not something that occurred overnight but a journey that has become apart of my story and my drive.  Thus, consciously, and spiritually, my experiences have led me to work in this field with a passion to return each day with a renewed goal to help others process grief, resolve trauma and ultimately lead healthy lives.